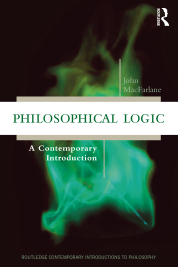 Introductory logic is generally taught as a straightforward technical discipline. In this book, John MacFarlane helps the reader think about the limitations of, presuppositions of, and alternatives to classical first-order predicate logic, making this an ideal introduction to philosophical logic for any student who already has completed an introductory logic course.

The book explores the following questions. Are there quantificational idioms that cannot be expressed with the familiar universal and existential quantifiers? How can logic be extended to capture modal notions like necessity and obligation? Does the material conditional adequately capture the meaning of ‘if’—and if not, what are the alternatives? Should logical consequence be understood in terms of models or in terms of proofs? Can one intelligibly question the validity of basic logical principles like modus ponens or double-negation elimination? Is the fact that classical logic validates the inference from a contradiction to anything a flaw, and if so, how can logic be modified to repair it? How, exactly, is logic related to reasoning? Must classical logic be revised in order to be applied to vague language, and if so how? Each chapter is organized around suggested readings and includes exercises designed to deepen the reader’s understanding.

Routledge has kindly allowed me to make a PDF available here, so that the book, a product of research at a public university, can be as widely accessible as possible. If you make use of the PDF and can afford it, please buy a copy of the book as well, to support the press’s decision to let me do this. (Routledge. | Amazon)

Errata for the first printing. 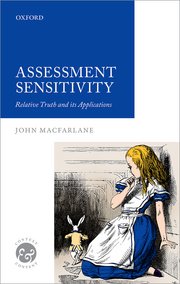 This book is about how we might make sense of the idea that truth is relative, and how we might use this idea to give satisfying accounts of parts of our thought and talk that have resisted traditional methods of analysis. Although there is a substantial philosophical literature on relativism about truth, it has tended to focus on refutations of the doctrine, or refutations of these refutations, at the expense of saying clearly what the doctrine is. The aim here is to start by giving a clear account of what it is to be a relativist about truth, and then to use the view to give satisfying accounts of what we mean when we talk about what is tasty, what we know, what will happen, what might be the case, and what we ought to do.

Oxford University Press has kindly allowed me to make a PDF version available here, so that the book, the product of research at a public university, can be as widely accessible as possible. If you make use of the PDF, please buy a copy of the book as well, to support OUP’s decision to let me do this. (Oxford University Press | Amazon)

What Does it Mean to Say that Logic is Formal?

Much philosophy of logic is shaped, explicitly or implicitly, by the thought that logic is distinctively formal and abstracts from material content. The distinction between formal and material does not appear to coincide with the more familiar distinctions between a priori and empirical, necessary and contingent, analytic and synthetic—indeed, it is often invoked to explain these. And although there are clear notions of formality that advert to schematic inference patterns, syntactic rules, and grammar, none of these is capable of demarcating logic. What does it mean, then, to say that logic is distinctively formal?

Three things: logic is said to be formal (or “topic-neutral”)…

Though these three notions of formality are by no means equivalent, they are frequently run together. The reason, I argue, is that modern talk of the formality of logic has its source in Kant, and these three notions come together in the context of Kant’s transcendental philosophy. Outside of this context (e.g., in Frege), they can come apart. Attending to this history can help us to see the sources of our disparate intuitions about logicality, and more importantly to sort these intuitions into central and adventitious ones. I argue that we have largely lost sight of the notion of formality (1) by which logic was demarcated in a central tradition from Leibniz through Frege—the intellectual home of most of the philosophical projects for which it matters how logic is demarcated.

This historical perspective is especially useful in evaluating contemporary debates about the demarcation of logic, which often seem to turn on opposing but equally brute intuitions about logicality. As an illustration, I examine the popular permutation-invariance account of logicality, which is commonly motivated by appeal to sense (2) of formality. I present the account in a way that reveals a hidden lacuna, and I show how this lacuna might be filled by appealing to formality in sense (1).